PHILADELPHIA, May 23, 2022 /PRNewswire/ — Penn Medicine and Children’s Hospital of Philadelphia (CHOP), who together pioneered the research and development of the world’s first personalized cellular therapy for cancer — also known as CAR T cell therapy — have announced plans with Costa Rica’s CCSS, or the Caja Costarricense de Seguro Social (Social Security Program), to facilitate CAR T research in Costa Rica. The effort is a step toward global equity in clinical research opportunities involving the use of CAR T cell therapies, which represent a leading-edge approach to cancer care not widely available across the world. 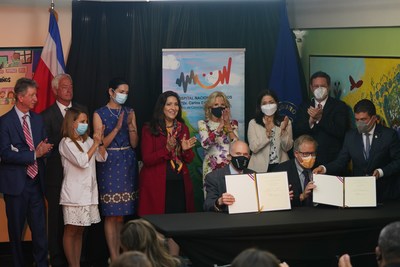 Two Memoranda of Understanding, between CCSS and Penn and CCSS and CHOP, were announced during a ceremony attended by First Lady Jill Biden on Sunday at the National Children’s Hospital in San Jose, Costa Rica. Representatives from both Penn Medicine and CHOP attended the ceremony, along with U.S. Ambassador to Costa Rica Cynthia Telles, PhD, who was previously a Clinical Professor in the UCLA Department of Psychiatry at the UCLA David Geffen School of Medicine.

Penn scientists led research, development, and clinical trials of the world’s first approved CAR T therapy in collaboration with Novartis and Children’s Hospital of Philadelphia, and their research has demonstrated remissions stretching beyond 10 years among patients who received the treatment after running out of conventional options. There are now six FDA-approved CAR T cell therapies in the United States, for six different cancers, including forms of both pediatric and adult leukemia and several other blood cancers.

“At least 15,000 patients across the world have received CAR T cells, and dozens more clinical trials using this approach are in progress, for almost every major tumor type, but people in many parts of the globe still do not have access to treatment with these transformative therapies,” said Carl H. June, MD, the Richard W. Vague Professor in Immunotherapy and director of the Center for Cellular Immunotherapies in Penn’s Perelman School of Medicine. “We are honored to work with our colleagues in Costa Rica in hopes of building a path for patients in underserved areas to have the opportunity to benefit from clinical research programs offering this personalized therapy.”

“Equity in cancer care and research is a central goal of our mission at the Abramson Cancer Center,” said Robert H. Vonderheide, MD, DPhil, director of Penn’s Abramson Cancer Center. “This new effort with Costa Rica exemplifies the longstanding work by Penn Medicine’s Center for Global Health to address disparities across the world.”

Under the terms of the two Memoranda of Understanding, the three groups will explore the potential for adult and pediatric patients to come to Penn or CHOP for efforts to collect their immune cells for manufacturing into CAR T cells at Penn. Then, it is intended that CAR T cells made successfully would be sent to Costa Rica for infusion as part of a clinical trial protocol conducted there. The three groups may also elect to explore educational and training opportunities, drawn from Penn and CHOP’s experience treating patients in the United States, as Costa Rican health care providers develop protocols to treat patients on clinical trials using this technology.

“Our program has been privileged to be part of the safe rollout of CAR T therapy around the world, but as with many of these cutting edge therapies, availability has been limited in middle income countries,” said Stephan A. Grupp, MD, PhD, section chief of the Cellular Therapy and Transplant Section and inaugural director of the Susan S. and Stephen P. Kelly Center for Cancer Immunotherapy at Children’s Hospital of Philadelphia. “Given the importance of equity and access, our work with Costa Rica may provide a template for further expanding the safe use of CAR T globally. Costa Rica has an outstanding universal health system with a strong commitment to accessible medical care, and we look forward to continuing this collaboration.”

“Thanks to this collaboration, our children and adults who are fighting cancer will have a new hope for a next-generation treatment developed by world leaders in this field,” said Dr. Álvaro Ramos Chaves, CCSS executive president.

Penn Medicine is one of the world’s leading academic medical centers, dedicated to the related missions of medical education, biomedical research, and excellence in patient care. Penn Medicine consists of the Raymond and Ruth Perelman School of Medicine at the University of Pennsylvania (founded in 1765 as the nation’s first medical school) and the University of Pennsylvania Health System, which together form a $9.9 billion enterprise.

The Perelman School of Medicine has been ranked among the top medical schools in the United States for more than 20 years, according to U.S. News & World Report’s survey of research-oriented medical schools. The School is consistently among the nation’s top recipients of funding from the National Institutes of Health, with $546 million awarded in the 2021 fiscal year.

Penn Medicine is powered by a talented and dedicated workforce of more than 47,000 people. The organization also has alliances with top community health systems across both Southeastern Pennsylvania and Southern New Jersey, creating more options for patients no matter where they live.

Penn Medicine is committed to improving lives and health through a variety of community-based programs and activities. In fiscal year 2021, Penn Medicine provided more than $619 million to benefit our community.

About Children’s Hospital of Philadelphia

About Children’s Hospital of Philadelphia: A non-profit, charitable organization, Children’s Hospital of Philadelphia was founded in 1855 as the nation’s first pediatric hospital. Through its long-standing commitment to providing exceptional patient care, training new generations of pediatric healthcare professionals, and pioneering major research initiatives, the 595-bed hospital has fostered many discoveries that have benefited children worldwide. Its pediatric research program is among the largest in the country. The institution has a well-established history of providing advanced pediatric care close to home through its CHOP Care Network, which includes more than 50 primary care practices, specialty care and surgical centers, urgent care centers, and community hospital alliances throughout Pennsylvania and New Jersey, as well as a new inpatient hospital with a dedicated pediatric emergency department in King of Prussia. In addition, its unique family-centered care and public service programs have brought Children’s Hospital of Philadelphia recognition as a leading advocate for children and adolescents. For more information, visit http://www.chop.edu.