In my early 60s, I lived about 280 miles away from my father. Before lockdown, I visited (with my son) about three times a year, four days at a time. The last time was February 2020. During lockdown, I phoned every week.

In November 2020, he phoned to say he’d transferred all control for his financial accounts to my brother — named on the Lasting Power of Attorney. I broke down in shock on the phone. He said his reason for leaving me out of the health LPA was due to geographical distance — I felt betrayed and humiliated.

In January 2021 I was diagnosed with cancer. I didn’t tell my dad or brother due to the hurt they’d caused. Dad would phone me with his health problems while I was having chemotherapy. I decided I’d tell him about my diagnosis when he eventually asked how my son and I were.

After five months he asked the question. But I still didn’t tell him about me. Just couldn’t be bothered. I had three weeks of radiotherapy, which finished in mid-September 2021. Then on the phone I mentioned the LPA and I told him how upset I was not to be named.

Then followed a character assassination — that I never kept in touch, that I wasn’t a proper daughter.

A few weeks later I wrote to Dad about my cancer. There was no caring reply, only that it was a huge shock, and that I should have said something. My brother contacted me and said he was sorry about my diagnosis. I said I was very upset about what he and my dad had decided between them, without any consultation with me.

It turns out that there is no health LPA, just the financial one, but yes, my brother has full control. He said that he was happy for me to take on the health LPA if I wanted it. I didn’t respond.

A cancer diagnosis has a dreadful effect on someone — never the same again. There’s a massive recalibration of what and who is important. I have never felt the same about my dad and brother since what they did secretly. I still love them, but I don’t feel the same and never will.

My lovely friends and neighbours got me through my cancer treatment. Dad has asked if I am going to visit him this year. He knows I gave up my job but said nothing when I told him. So I am living off my savings. Again, Dad knows this, but has shown no empathy.

If I’m honest, I don’t want to visit. And after all that’s been done I’m not sure why he wants to see me. I ask myself: would I do a round trip on public transport of nearly 600 miles, exhaust myself and pay for travel to see anyone else who did this to me? No, I wouldn’t. 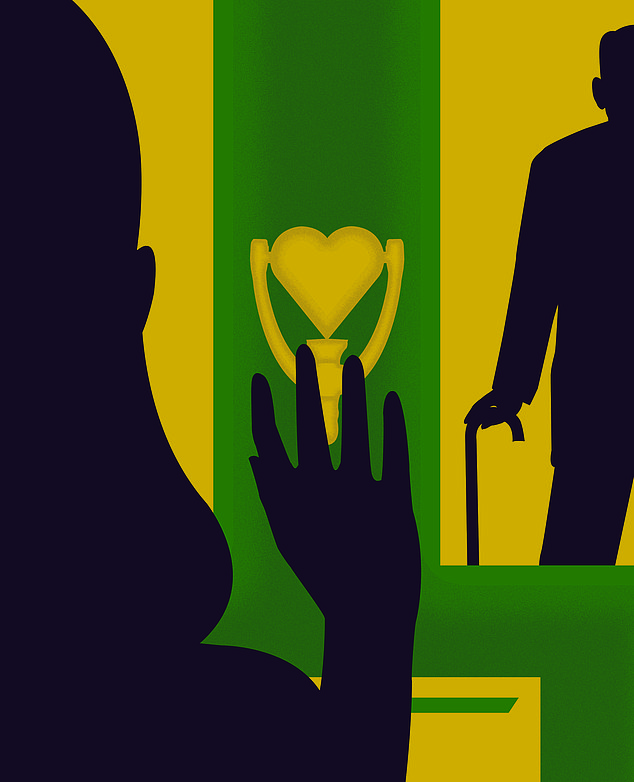 This week, Bel Mooney advises a woman who is unsure about visiting her father after he gave all control for his financial accounts to her brother

This week I received a curious little email from TK, who wrote: ‘You seem, as in today’s examples, to always plump for the “other” side, leaving the people who wrote to you with the guilt and blame for what has happened.

‘In doing so you appear to excuse really poor behaviour by the other parties. Surely most of these situations are a maximum of 50 per cent blame?’

TK was referring to last Saturday’s letters, one from a woman about her stepdaughter, and the other from a man who felt full of his own ‘issues’.

In both cases, I offered understanding and practical advice — but apportioned no ‘guilt and blame’.

So TK must have skim-read (a common failing these days), although of course I agree that there is usually ‘blame’ on both sides. It is a part of my job to point out to the writer of the problem letter that there are other factors to think about. Which brings me, Marina, to what your longer letter calls an ‘emotional pickle’.

Thought of the Day

A wall without windows

For the spirit to breeze through

A wall without a door

For love to walk in.

Who is actually to ‘blame’ for your current mood of resentment towards your father, and unwillingness to visit him?

Is it him, or your brother — or the cancer which has rocked your life and (you say) changed you for ever? It has to be all three (yes, an obvious point), but I would hate you to allow your post-cancer sense of life being so short to trick you into believing that your father no longer matters to you.

At this point in your life, after all you have endured, the last thing you need is to seize on this (to me) puzzling obsession with the LPA and let it weigh you down.

In short, I do believe you should go and see your father. This view might be coloured by the death of my own mother a week ago, but is also rooted in my passionate commitment to forgiveness as well as family duty.

I’ll start with your words: ‘And after all that’s been done I’m not sure why he wants to see me.’ Look, he wants to see you because you are his daughter and he still loves you. ‘All that’s been done’ means one error of judgment re a legal piece of paper and some cross words uttered by both of you. Is that really enough to end this father-daughter relationship for ever? I say an unequivocal, no.

Go back to the whole ghastly period of lockdown — when your father was alone and probably scared stiff. Being local, your brother almost certainly checked up on him. With the whole country in a heightened state of anxiety, your father began to worry about a time when he would not be able to look after his own personal, financial or business affairs, hence the need for LPA.

A man of his generation probably thought it best that his male offspring take charge — and so it was set up, without thought for your feelings. Which was wrong. But can I ask you please to view it as carelessness and not a source of deliberate insult for you to brood on for ever?

I tell you, my mother too became quite selfishly absorbed with her own health and sometimes said unkind things to me — but I took it. As one must.

And if your father lacked the language of kindness, surely that’s down to men his age being pretty useless with words and feelings? If you don’t go to visit him this year everything will become far worse.

Please let him see his daughter and grandson again, and with an open heart.

None of us know when death will come.

Do we tell son about birth mother?

Should we tell our adult adopted son we know his birth mother’s name and address? My wife and I are now elderly.

When we found out we were unlikely to have our own children, we started adoption procedures, resulting in the gift of a son, a few weeks old. (Remarkably, we produced our own son later on.)

We were always open about his adoption and he always had access to the letter from the adoption society which gave a brief history of his teenage parents and his birth in a mother-and-baby home. He’s now in his late 40s with two daughters.

Keen on tracing the family tree, our younger son found our adopted son’s mother — now 67, and married with children. Neither she nor our adopted son have made any known effort to trace each other, though we have always offered help, if needed.

Should we now tell him we have recently acquired information about his mother and let him decide whether he wants to pursue it? Or should we just keep this to ourselves?

People have varying attitudes towards tracing birth parents —views that can also shift over time.

That your first son never seemed very bothered about tracing his birth mother says much for the stability of the family that you created.

But you can have no way of knowing what he felt in the recesses of his heart when younger, or whether his apparent indifference might change as he grows older.

It is so good that you always made sure he knew he had your support whatever he decided. You and your wife clearly raised a man settled in his own skin — and should be proud of that.

More from Bel Mooney for the Daily Mail…

So I really see no reason at all to keep your second son’s researches secret.

Reticence can be appropriate within a family, no matter how stable; on the other hand, it can be problematic if a secret, once revealed, proves to be unpopular or, worse, hurtful.

Don’t you think, ‘Why on earth didn’t you tell me?’ is a rebuke/accusation to be avoided?

It seems to me that the ideal situation would be for your second son to have this conversation with his brother.

He is the one who has been researching and who made the discovery. I hope the two men have a good enough relationship to be able to talk it through, and for your son to tell his older brother that whatever he decides he will have the full support of you all.

However, if they are not close for any reason, then I think that you should remove the weight of this dilemma from your own minds as soon as possible and let your son have the information in order to make up his own mind.

It could be that he’ll want to know for the sake of his two daughters.

But maybe he won’t. Either way, he should be given the choice.

And finally…  So blessed by Mum’s life and love

Last Mothering Sunday was so strange. For at 8.30am the previous day — that golden Saturday when our world seemed full of flowers and children — the call came from hospital saying my mother had just given up her fight.

I’d had a six-hour vigil by her bed on the Friday, stroking her poor head, saying all the things I wanted to say, reminding her of lovely times, reciting the Lord’s Prayer, telling her not to think she had to stay for us but to go in peace.

At one point I joked: ‘Dad always did call you stubborn, Mum!’ smoothing her brow and repeating over and over, ‘It’s time.’

Names are changed to protect identities.

Bel reads all letters but regrets she cannot enter into personal correspondence.

She was on ‘end of life’ care so her breathing rasped shallowly, but who knows what she heard?

In any case, she had already said she wanted to be ‘with Teddy’, my father. Get well cards to ‘Great-Nan’ stood by her bed, sweet symbols of the family love that surrounded her until she died — and still does.

Now her newly covered wing chair stands empty in the little cottage-annexe we made so beautiful, her home for just ten months.

My husband (who cared for her with miraculous devotion) and I had grown so used to Sunday lunches here and taking her meals on a covered tray and delivering foaming hot chocolate each night that — although suddenly free of all that time and worry — we feel rather lost.

But my goodness, what a blessing to have had my parents for so long.

This Matriarch-Orphan can only give thanks for their lives and the love they gave.

They endured some very tense, hard times in their long life together, but so much happiness too.

The family meant everything to them both, and that is what I learned at their knees, passed on in turn to my two.

Now I step forward, as must we all, taking my place in line —while holding out a needy hand in fellow-feeling to all those of you who understand this loss.